It is the male gods that appear mainly in the Nordic creation mythology. First of all Odin. Then his two brothers Vilje and Ve. In the great poem “Voluspå” they are also called Høne and Lodur.

It is the male gods that appear mainly in the Nordic creation mythology. First of all Odin. Then his two brothers Vilje and Ve. In the great poem “Voluspå” they are also called Høne and Lodur. Female birth is subordinated, but a female creation, Gevjon has been a creator. Additionally the God Heimdall was born through nine giant women without any help from a male God.

According to the Islandic poet, Snorri Sturlasson, the giant Ymer was the first creature in cosmos, and he arrived in the old times when there was Ginnungagap, det chaotic nothing. In the south the world Muspelheim was created. Muspelheim is full of light and heath. Then Nivlheim was created in the north. The world of the cold, and from here 12 rivers flow inside the Ginnungagap.

When the heat from Muspelheim met the cold from Nivlheim it was created a giant power that became Yme. Yme created life on his own. From one arm it grew out a child and from the bone another child, and they created new beings among them, rimtusser and jotnebeings. Together with Yme, a great ancient cow was created, Audhumbla, “the cow rich on milk”, and for whom Yme should nourish. The cow licked salt from stones, og one day he licked out a head. This was Bure, means “son”. Bure created Bor, his name means also “son”. Bure and Bor was from another family as Yme. 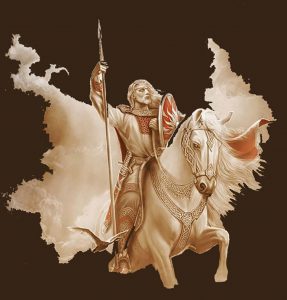 Bor created a being with Bestla from Yme’s family. When the two families mixed a new ancestry was created, namely the gods. That’s why Odin and his two brothers are called “the sons of Bor”.

Like in other mythologies second generation would make riot towards the first. The sons killed the father and created the world like they wanted it. Odin and his brothers killed Yme, and from him they parted his body and created the world. His bones became mountains, his meat became earth, the blood became ocean, seas and rivers, His skulls was lifted up and became the firmament and his eyebrows became skyes. The world was created from a murder, and this excitement is in the shadow of the Nordic mythology until the end of their world, the Ragnarok.

In the young Edda, the poet Snorri Sturlason, systematized and told the creation myths, but it is also told in Voluspå. In Voluspå its told about other beings. The URWOMEN. Giantwomen came and disturbed the the first golden age of the gods. Women could make birth and they were creators independent of the gods. Like a reaction the gods made the dwarfs and humans. In Voluspå they say the humans were created from earth, while in the young Edda they are formed out of two wooden trunks. The man was created from the Ash and the woman from the alm. They were called Ask and Embla. Odin breathe on them, Høne gave them mind and ability to move, and Lodurgave them blood and the look like the gods. Finally the gods gave the humans destiny. Three women was created, they were called the norns, they were able to read the destiny of all. The Nordic mythology does not contain any fall myth. There is no evidence that humans go against the gods, nor that they are under arranged, and in addition the two genders are made at the same time, and they are equipped the same and they are not under arranged, but are equal. The last humans that survived Ragnarok are Liv and Livtrase.